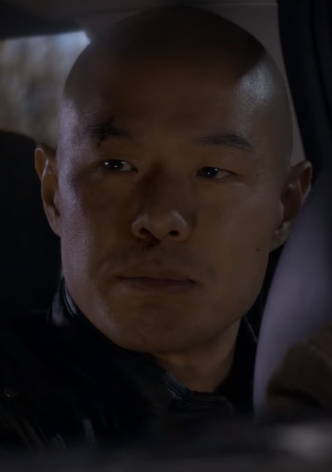 "Do you think I did all this because they arrested me? You were just doing your job, I respect that. What I don’t respect is that you killed my brother, took over my business!"

Mako Tanida is a villain from the first season of the series The Blacklist, where he appears as the main villain of the sixteenth episode.

He was portrayed by Hoon Lee.

Mako Tanida was an influential yakuza boss in Japan and the clan chief of the Azuma dojin in Osaka. He was a business partner of master criminal vendetta

The first person he meets is Agent Sam Raimo, whom he kidnaps from his home and takes away. Satisfied, he announces that he has waited a very long time for this reunion and then forces him to his knees. Tanida proclaims that Raimo lacks honor and humility and then throws a blade at his feet. In accordance with the Bushido code of feudal Japan, Tanida demands that Raimo commit ritual suicide for his sins against Tanida and promises to let Raimo’s family live in return. Tanida gives Raimo sixty seconds to make a decision and disappears with his henchmen after Raimo kills himself to his satisfaction. The rest of the Reddington task force is now on Tanida’s list as well.

Tanida demands that Raimo kill himself

Under an alias, Tanida now enters the United States and only a short time later kills Agent Maguire, whose body he throws off a bridge. His next target is Agent Donald Ressler, who knows about Tanida’s revenge plans and therefore wants to keep his girlfriend Audrey safe. However, while still on the road, the car is attacked by Tanida and his men, resulting in an exchange of gunfire. After both cars stop, Ressler lunges at Tanida and tries to wrestle the gun from him. When Tanida sees that Audrey has also gotten out of the car, he points the gun at Audrey and shoots her down. As Ressler immediately rushes to Audrey, he thus enables Tanida to escape. Audrey dies from her wounds only moments later and Ressler begins a vendetta.

However, Ressler together with Bobby Jonica can locate Tanida’s hiding place. With guns drawn, they storm into the apartment and overpower Tanida, with whom they then drive away. During the trip, however, Tanida suddenly starts talking and asks Ressler if he remembers their first encounter – Tanida’s arrest in Japan. He reveals that this was the last time he, or anyone else, saw his brother Aiko alive. Tanida reveals that he didn’t open the hunt for the task force to take revenge for his arrest, but to find out which of the task force agents killed his brother and usurped his criminal empire. With Ressler in complete disbelief, Tanida realizes that Jonica must be responsible and shouts to Ressler that he will kill them both.