Very few people like to talk about death. For many, the thought is a rather terrifying notion with many unanswered questions and uncertainty. Palliative physician Lukas Radbruch explains in an interview what happens to the body after death.

For links on this page the dealer pays if necessary. a commission, z.B. for those marked with or green underlining. Read more.

What happens to the soul after death, no one can really say. This intangibility and the thought that you will simply not be around when it happens makes death a terrifying concept for many people. But fortunately the whole topic is not quite so intangible.

In this way, it is possible to describe quite precisely what will happen to the body after the person has passed away.

The body slowly shuts down

"When someone dies, it is usually not in connection with an accident or a major injury, but quite often in the context of illness or old age", Lukas Radbruch, palliative physician and president of the German Society for Palliative Medicine, explains in an interview.

"Since it is so that the heart function slowly decreases. The heart and the circulation function worse and worse for a while and some changes already show in the body." If a person’s death is imminent, kidney functions are already going down and less urine is being excreted. "Those affected also no longer have an appetite or thirst beforehand."

It also happens that the circulation centralizes- Arms, hands and feet are no longer supplied with blood properly, turn slightly gray to blue and the pulse can no longer be felt on the hand. "The blood is centralized in the core of the body so that it is better supplied with blood", Radbruch explains. "These are normal stress reactions of the body. The heart beats faster and then slower, because it can’t take any more, and then it stops at some point."

In most cases, he says, the dying person’s lung function stops first: So the person stops breathing and only after two to three minutes the heart also falls silent. 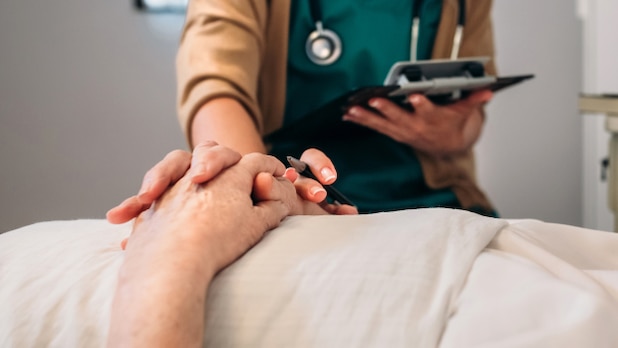 In many diseases, such as cancer or heart and lung diseases, there is the so-called cachexia. This means that the body is emaciated. However, this is not only because people do not eat enough. "At some point, the body is no longer able to cope with such an illness", explains Radbruch. "It is often the case that food and liquids have not been absorbed or processed properly for a long time."

So even if you were to feed the person in this situation with an IV, the body could no longer process the calories. "That is why increasingly first the fat is lost and then the muscles. In people who are about to die, you often see that they are completely emaciated – this degradation has then usually already happened over the last half year."

Resuscitation can save the brain

But of course, not all people die after a severe course of disease. There are also rather unexpected, sudden demises- For example, in the case of acute cardiac arrest. "The moment the circulatory system no longer functions, i.e. where the heart stops beating and blood is no longer being pumped through the circulatory system, the clock is practically ticking", knows Radbruch.

"Because the brain is the organ that can do the least without oxygen. We know that severe brain damage already occurs after about three minutes." The arriving paramedics and EMTs can save brain function in a cardiac arrest only if resuscitative measures were started within the first three minutes.

"This is also the reason why lay resuscitation is so important", emphasizes Radbruch. "If the first responder starts with mouth-to-mouth resuscitation and chest compressions, then the person has a chance until the ambulance arrives." But the doctor can also reassure: "It is often the case that you call an ambulance because you urgently need a doctor and not because someone drops dead- so the heart is usually still pumping for a few minutes."

If the person goes to the hospital and receives direct care, the chances of escaping without permanent damage are good, he said.

Better chances in case of hypothermia

There are even exceptions that further increase the chances of survival. Thus, when the body is hypothermic, it endures much longer without oxygen. "Normally, our body core has a temperature of around 37 degrees. For example, when people collapse on a lake in winter and are under ice, the core temperature may drop to as low as 27 degrees", reports Radbruch.

"There are individual reports that people have been rescued and revived after half an hour, and have survived without brain damage." In such a hypothermia case, the persons are brought to the hospital under resuscitation measures and carefully warmed up again. "In emergency medicine it is said: No person is dead until he is warm and dead."

The degradation process after death

If nothing more can be done for the person in the case of sudden death, a process begins in the body already after some minutes, which can be described temporally even quite well.

After just three minutes of the heart standing still, brain cells start to die off. But it is not only the gray cells that are urgently dependent on the blood supply. In addition to heart survival, organs such as kidneys and liver also survive this condition for a maximum of two hours. The skin cells, on the other hand, last somewhat longer: They die only after about two days.

The "sure signs of death"

When doctors issue a death certificate, they use the so-called "sure signs of death" as a guide. One of these signs is rigor mortis.

"The muscles solidify first in the jaw. This occurs after half an hour to an hour and is very pronounced after three to four hours", Radbruch explains. "The other muscles take longer, which can take up to a day, for rigor mortis to be fully developed." After one to two days, the rigidity slowly dissolves and the muscles become mobile again. "This is a final cramping of the muscles and a sign that they are completely dead."

Body stains can sometimes appear even more quickly. "This means that the blood accumulates in the tissue at the dependent body parts. For someone lying on their back, the pelvis and shoulder." At this point there would be bluish discoloration similar to a bruise. "If I press on it with my thumb and it can’t be pushed away, it’s a sure sign of death- that occurs after two to four hours."

Signs of decomposition, on the other hand, will not be available until the next day at the earliest. "With the viscera in the abdominal cavity and the rib cage, decomposition starts relatively early.", White Radbruch. "Most likely in the intestinal tract, because that’s where the enzymes are that are supposed to digest otherwise. It takes about three to four days for muscles to start decomposing."

Depending on the ambient temperature, decomposition sometimes occurs one or two days later. Here, too, the cooler the corpse is stored, the longer it can be "preserved".